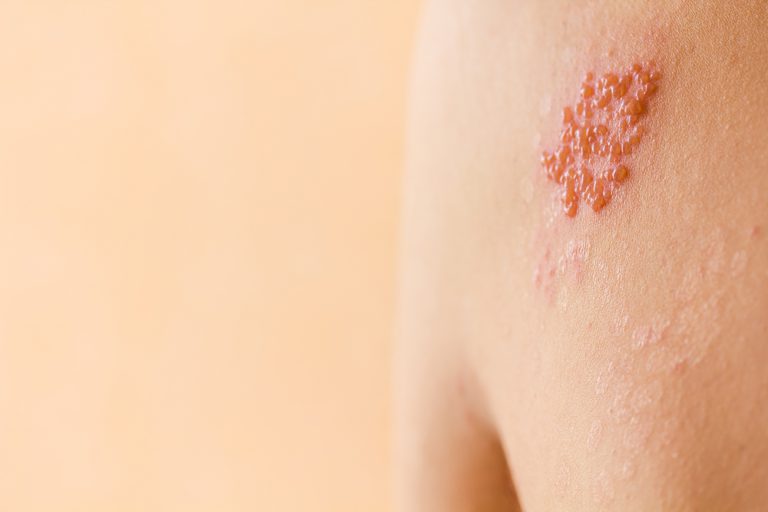 Herpes is an infection caused by the herpes simplex virus (HSV). Oral herpes causes cold sores around the mouth or face. Genital herpes is an STD (sexually transmitted disease) that can be located in the genital area, anus, and buttocks. There are other herpes that can affect various parts of the body, such as the eyes and skin. This virus can become dangerous in new-borns or people with a very depressed immune system.

People who get this virus have it forever because there is no cure. Herpes becomes dormant in the body and will reappear when the body’s defences are low in times of stress, with changes in temperature, or during a woman’s menstrual period.

There are two types of herpes simplex:

Serological tests are the only reliable method for differentiating both types of herpes.

Both types of herpes manifest in the same way: the appearance of blisters that cause localised itching and stinging. Two or three days later, the sores appear and will take about a week or two to heal and go away completely. It is common for people to have several outbreaks a year, although with time they gradually become less frequent.

Herpes simplex is spread by direct contact. Therefore, to prevent contagion, one should avoid contact, especially when the blisters have not yet healed.

Other useful advice would be to avoid direct sunlight as it energises the virus itself, as well as not sharing everyday objects such as towels, glasses or cutlery.

In the case of genital herpes, the use of a condom is imperative during sex.

Shingles are very painful blisters and rashes caused by the chickenpox virus. It is very contagious and appears on certain nerves in the body as an irritated patch of skin, typically on the chest or back. Although it can occur at any age, one is more likely to develop this condition if they:

This virus can also affect other body areas such as the face, eyes and ears, and can take up to a month to disappear completely.

Shingles cause pain, tingling and burning, during the early stages, prior to any visible skin rash. In some cases, there is also: abdominal pain, fever, hot and cold flashes, a feeling of general malaise, genital ulcers, headaches, joint pain and swollen lymph nodes.

Avoid contact with the skin rashes and blisters found in people with a current herpes outbreak or going through chickenpox, especially if you have never had this disease or have not been vaccinated against it.

If a person comes into direct contact with the shingles and has never had chickenpox or been vaccinated against it, he or she may be infected with the chickenpox itself rather than shingles.

The most effective treatment for herpes is based on retroviral drugs that act as antibiotics for viruses. They can be administered as a cream if the herpes is cutaneous, or in tablet form if the infection is in a mucous membrane.

Shingles is the most dangerous of all types of herpes. If a pregnant woman transmits this infection to her foetus it may cause malformations.

In adults, if herpes appears on the trigeminal nerve in the face, it can cause chronic neuralgia. If herpes affects the optic nerve it can lead to blindness.