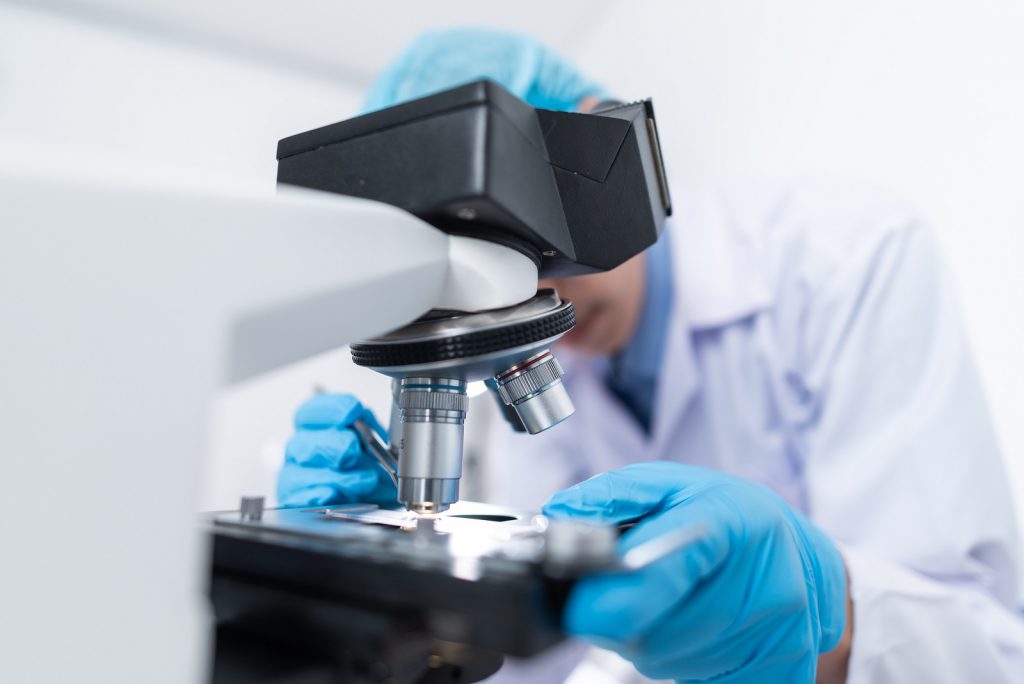 A biopsy is a diagnostic procedure that consists of taking a sample of tissue from the body so that it can be analysed more closely, typically under a microscope. This type of test is essential for diagnosing many health issues.

An endoscopy is nothing more than looking inside the body. A long and flexible tube with a camera and light fixed at the end of it is inserted into the body to provide a clear visualisation of a hollow organ or cavity. If anything abnormal or suspicious is observed, an endoscopic biopsy may be carried out.

The type of biopsy will be determined by the specific body region where the issue is located. Endoscopes are minimally invasive and can be introduced via the urinary tract, rectum, mouth, or through a tiny incision in the skin.

One of the most common type of biopsy is digestive endoscopy, which is used for pathologies of the oesophagus, stomach and small intestine (for example, for diagnosing Barrett’s oesophagus or coeliac disease).

Another example of an endoscopic biopsy could be a bronchoscopy, which is performed to extract samples from the lungs.

Depending on the type of biopsy, different levels of anaesthesia will be administered.

A skin biopsy’s purpose is to take a skin sample in order to be able to then study it under a microscope. Skin related health issues that may be diagnosed this way include squamous cell carcinoma, basal cell carcinoma and melanoma, as well as other inflammatory or infectious diseases.

There are different ways of taking skin samples:

– Biopsy punch: a device of varying diameter (2, 3, 4, 5 or 6 mm) similar in shape to an injection needle. Part or all of the tissue is removed, depending on the thickness of the blade.

– Incisional biopsy: part of the lesion is removed in an attempt to classify the health issue and remove it later.

– Excisional biopsy: the entire lesion is removed with a certain safety margin, depending on its particular characteristics and location.

– Biopsy by scraping/shaving: a simple procedure commonly used in less serious pathologies that only affect the surface of the skin.

Used in tissues with a relative high cancer rate such as in the breast or prostate, as well as in renal biopsies for diagnosing renal failure.

The device used possesses a slightly thicker needle than those used in blood extractions, allowing to take out tissue samples between 1 and 2 cm long, but of only between 0.5 and 1.5 mm in diameter.

Different radiological procedures are used to take these images, such as ultrasound, CT or MRI. Sometimes several of them may be conducted at the same time, as in the MRI-echography fusion biopsies that have been done for some time at Hospital Ochoa for prostate examinations.

Another example of Trucut core biopsy is for bone marrow, performed either on the pelvis or sternum, for diagnosing haematological neoplasms (lymphomas, multiple myeloma, etc.).

Once the diagnosis has been achieved by any of the techniques described above, it may then be decided to remove the rest of the affected tissue.

What is done with the tissue samples obtained from the biopsy?

The tissue sample is typically preserved in a special solution, normally formaldehyde, and sent to the laboratory to be processed and stained for microscopic examination.

On rare occasions, before submerging it in formaldehyde, the sample may be studied while frozen (for example, when examining the breast’s sentinel lymph node or in melanomas).

Other preservatives other than formaldehyde may be used when the diagnostical procedure involves immunofluorescence, molecular pathology or electron microscopy.