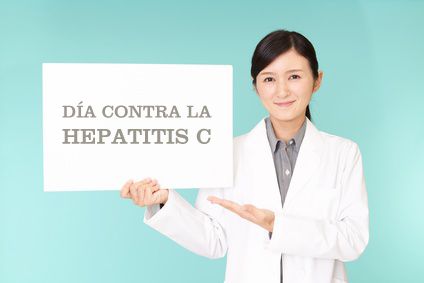 These five types of viruses are the most common cause of hepatitis. However, the disease may also be due to different kinds of infections, toxic substances (alcohol or some drugs) or autoimmune disorders. Over 170 million people worldwide are infected with Hepatitis C.

October 1st is the International Day against Hepatitis C, a disease that affects over 170 million people in the world infected with this virus.

Hepatitis is an inflammation of the liver. The condition may enter spontaneously into remission or evolve into a fibrosis, cirrhosis or even liver cancer. Hepatitis viruses are the most common cause of hepatitis, which can also be due to other infections, toxic substances (such as alcohol or some drugs) or autoimmune disorders.

Almost half of the cases of Hepatitis C will develop cirrhosis in the 10 years following contagion, while 40% of patients with cirrhosis present a chronic infection derived from the C Virus. Hence the relationship between pathologies.

Another infection linked in many cases to Hepatitis C is AIDS (HIV). The presence of both infections favours a more negative progression of the disease.

How is hepatitis C spread?

Hepatitis C is not contagious unless the person has direct contact with infected blood. This means that a person infected with this virus cannot pass it on after a casual contact or by coughing, shaking hands or kissing or sharing eating utensils, neither in swimming pools or public baths. It is usually spread by direct contact with the blood of a person who has the disease. In rare cases, Hepatitis C can be transmitted from the mother to her baby before birth. This virus could also be passed during sexual intercourse, or when sharing razors and toothbrushes, although these cases are also rare. Often, the cause of hepatitis C is never found.

What can you do to prevent getting Hepatitis C?

Given that there is no vaccine available that to protect you against hepatitis C, being informed plays a key role.

1. Do not share utensils which may cause bleeding, such as razors, manicure items or toothbrushes.

2. Cover open wounds to reduce the risk of exposure to infected blood.

3. Always use condoms if you have intercourse, unsafe sex practices or multiple partners.

4. In case of being infected, inform anyone around you that they might be at risk so they can take precautions, for example nurses when having a blood test or in case of having colonoscopy.

5. With regard to tattoos, be careful that the ink used is open for the first time when having one done. If you are a carrier of the C virus, you should also inform the professional tattooing you.

Remember that the C virus is not the only one, there are others who have been identified by the scientific community; four others in particular, known as Hepatitis A, B, D and E and all causing liver disease.